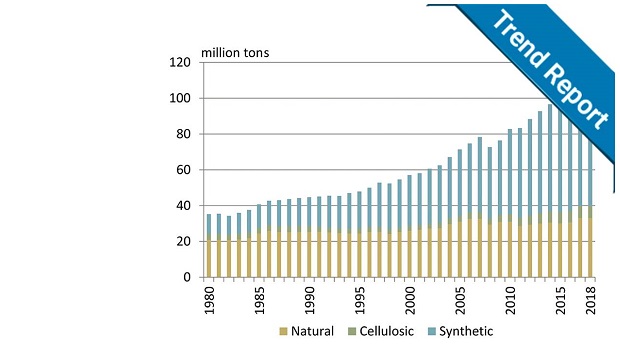 The latest edition of the textile yearbook “The Fiber Year 2019“ was presented during Techtextil in Frankfurt by the Fiber Year GmbH, Speicher/Switzerland.

It covers world man-made and natural fiber production and includes nonwovens as well as unspun data. It reveals latest developments, trade data for main markets and contains several contributions from industry experts ranging from biopolymers, cotton, viscose and wool to textile machinery shipments.
The worsening economic climate has taken its toll on fiber production that has experienced the slowest growth in 3 years at 1 % to about 106 million tons (Fig. 1). Natural fibers (share 31 %) softened 1.8 % as result of lower cotton cultivation while the man-made fiber business continued its 10-year expansion. Growth of 2.2 % at synthetic fibers (share 63 %) was once again outpaced by cellulosic fibers (share 6 %) lifting output by 2.7 %. Cellulosic fibers steadily grew between 2010 and 2018 with a CAGR of +6.1 %. 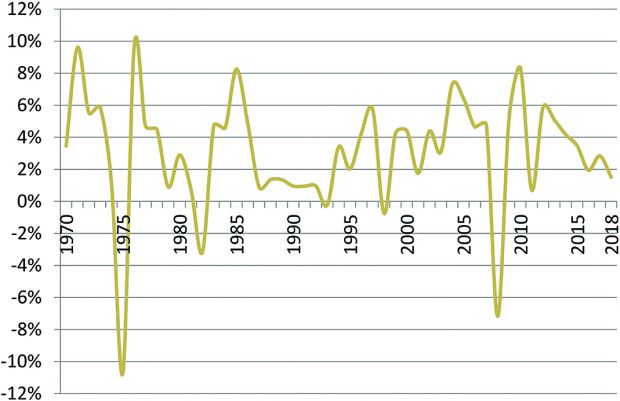 The yarn segment has delivered quite oppositional results with filament yarns recording the highest growth rate in 3 years (+3.5 % to 48 million tons; PET +4.0 %, PA -0.5 %, CV +1.8 %, PP +1.5 %) and remaining in positive territory since financial crisis. Meanwhile, spun yarn manufacturing turned negative after a 2-year growth period (-1 % to 39 million tons). Hence, filaments have not only maintained their majority share in the 5th year in a row but further strengthened their position to hold around 55 % by now.
The highest growth rates has been seen for carbon fibers (>10 %), aramid fibers and elastane (spandex) fibers (+6 %; China + 25 %). Total elastane production was 850,000 tons. 77 % of elastane capacity is in China (5 % Japan/USA/Europe, 18 % ROW).
Dynamics in nonwovens and unspun applications once again experienced a faster speed of expansion than fibers and yarns in the 5th consecutive year at 4 % to 18.4 million tons, even if dynamics have lost steam as last year’s increase meant the slowest growth in 6 years.
Overall, a downward tendency in terms of fiber market growth is more or less visible in the recent 6 years (Fig. 2). While the expansion in 2012 marked an increase of nearly 6 %, deceleration has been noticed since, to come down to 1.5 % in 2018. This length of annual decelerations in textile consumption is quite exceptional and unique in the 21st century. 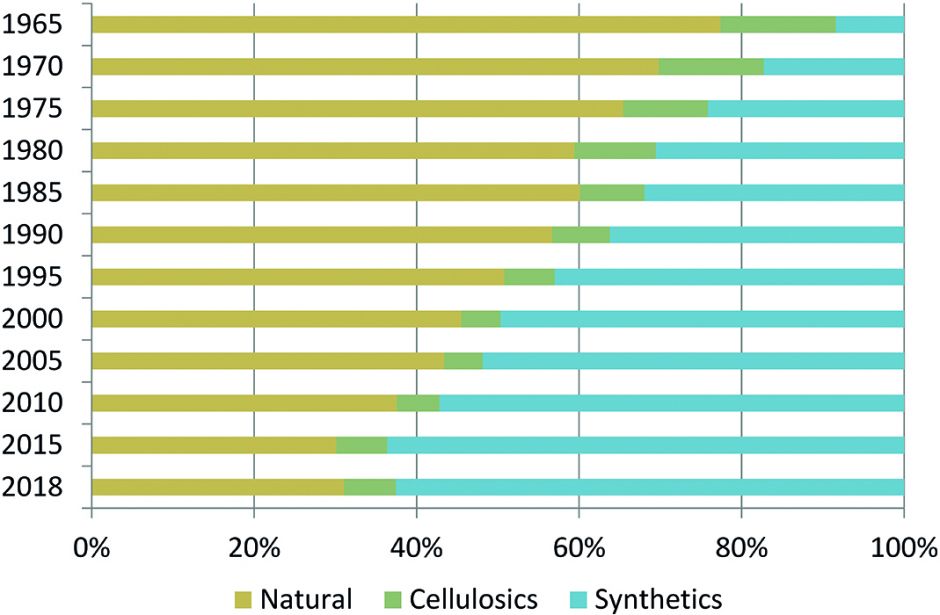 Throwing a glance at the fiber material composition reveals that output has been steadily progressing in favor of man-made fibers, in particular polyester and viscose fibers, the only mainstream man-made fiber with non-stop annual growth after financial crisis. 2018 for the first time polyester staple fiber production decreased by 0.6 %. The perception of fibers being predominantly of man-made origin is well-known. What is new and probably the first time in history is that the share of synthetic fibers remained in the second sequenced year below its peak from 2015/16 while the relative position of cellulosic fibers arrived at the highest level in 27 years (Fig. 3). The long-term view of the global fiber market development shows drastic changes at expense of natural fibers while manmade fibers tripled their share to nearly 70 % by now.
More details can be found in “The Fiber Year 2019“, which is available for CHF 650 (single user) or CHF 1200 (company), respectively.