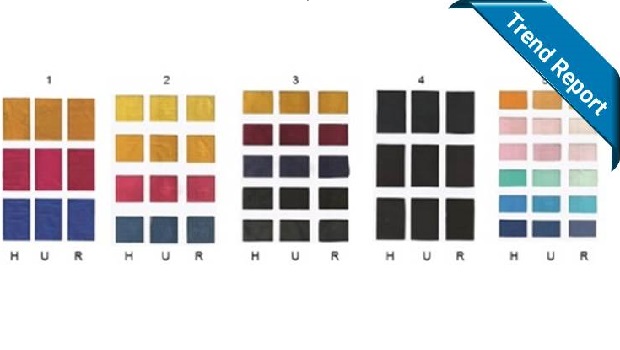 The intrinsically flame-retardant polyamide fibers developed at the DITF are suitable for a wide range of textile applications. In addition to the primary objective of achieving a high and permanent flame-retardant effect for polyamide 6 (PA 6), the textiles obtained from these fibers show very good material properties. Good dyeability with different dye classes combined with a high dye absorption as well as high abrasion resistance and rub fastness prove that the flame-retardant components do not influence the material properties. In addition, their incorporation into the polymer chain prevents them from migrating to the fiber surface, which has been clearly demonstrated by skin compatibility tests. Further investigations with regard to the production of a textured flame-retardant textile and the determination of the changed fire behavior in relation to the textile made of plain yarn are the subject of current research.

PA 6 is one of the most widely used plastics today. The good mechanical properties, high thermal and oxidative stability and chemical resistance predestine PA 6 for its use in various applications such as microelectronics, transport and textile applications. The use of technical textiles made of PA 6 places high demands on flame retardancy in many areas. Due to its molecular structure, PA 6 is highly flammable and must therefore be equipped with flame-retardants in order to meet the fire protection class of the respective application. Flame-retardant finishing is particularly difficult in the fiber sector, where process-related difficulties also arise. Typical methods are based on the addition of additives during fiber production in the spinning process or the subsequent finishing of the textile in the course of coating processes. However, both methods have disadvantages: high additive concentrations are needed to achieve the required flame retardancy. The physical and physiological properties of the textiles become significantly worse and, as in the case of red phosphorus, undesirable side reactions can occur. In addition, the flame retardancy is not permanent, since it is only introduced into the polymer in particulate form and released again through aging and washing processes. Halogen-containing flame-retardants, which have been used for a long time, are increasingly being replaced by more environmentally friendly alternatives due to the harmful or toxic secondary products they generate in a fire and are also increasingly being driven out of the market by the REACH regulation. Newer methods provide the use of flame-retardant organophosphorus compounds, which are added during synthesis to achieve permanent flame retardancy. However, the examples for the direct production of flame-retardant PA 6 fibers are rather rare.
The DITF has succeeded in implementing such an approach by chemically integrating the flame-retardants into the polymer chain of PA 6. In this way, PA 6 could be equipped with intrinsic and therefore permanent flame retardancy. 2 organophosphorus compounds were selected as flame-retardant components, Ukanol RD and 3-HPP (3-hydroxyphenylphosphinylpropanoic acid). The components are added directly before the start of the polycondensation reaction and thus enable easy and uncomplicated reaction control. The obtained molecular weights and viscosities of the flame-retardant polyamides are high enough to be processed into multifilament yarns in the melt spinning process. The resulting plain yarns showed strengths of up to 55 cN/tex and Young's moduli in the range of 260-300 cN/tex. In order to investigate possible areas of application, circular knitted fabrics were produced, which were subjected to various test procedures.

In order to investigate the dyeing behavior, different dye classes were examined using the exhaust method and evaluated on the basis of colorimetric measurements (Data-color measurements). In addition to the acid dyes, which were typically used for polyamide dyeing, dispersion dyes, metal complex dyes, sulfur dyes and basic dyes were also investigated. The measurement of the dye concentration in the residual liquor showed that the textiles almost completely absorbed the dye. As can be seen in Fig. 1, the color fastness is almost identical. Only the dyeings with the basic dyestuffs are more intensive for both flame-retardant textile samples. Here, the excess of carboxylic acids, which resulted from the manufacturing process of the polyamides, cause an increased dye uptake and thus color intensification 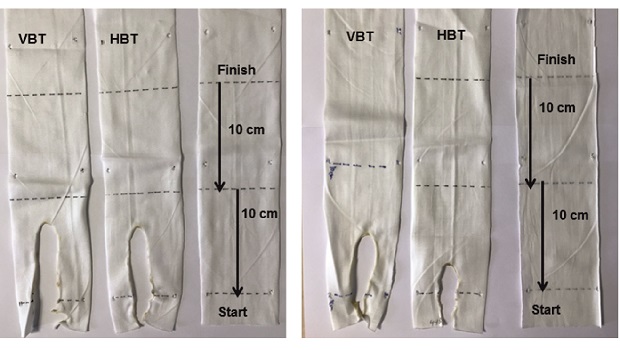 The burning behavior of the textile samples was also investigated. For this purpose, the textiles were conditioned for 88 hours in a climatic room at 23 °C and 50 % humidity. LOI measurements were carried out according to the ASTM 2863-06a protocol. Horizontal and vertical burning tests were performed according to DIN IEC 60695-11-10 (HB) / 20 (VB), which correspond to the UL94 standard.
Both samples show high LOI values and are very similar in their burning behavior. Before the required oxygen concentration is reached, which is needed to ignite the textile, the fabric melted, but could not be ignited even after several ignition tests. The burning distance could not be reached thereby, instead charred polymer drops formed at the appropriate places. At O2 concentrations >35 vol.%, the textile samples were ignited and burned within the intended burning distance in 22-28 seconds, forming drops. This is in stark contrast to the PA 6 reference sample, which was ignited after 2-3 ignition tests and burnt immediately with burning melting drops.
The horizontal and vertical combustion tests of both specimens also confirmed the improved flame retardancy, which can be assessed as category V-0 according to the UL94 test specifications. Despite several ignition tests, both flame-retardant textile samples did not burn. The textile withdrew at the point which came into contact with the Bunsen burner flame and could not be ignited. No burning or dripping of polymer material was observed in all burning tests, instead charring took place at the respective location. Both samples required constant support from the flame of the Bunsen burner to be burned. If the Bunsen burner was removed, the flame extinguished with a small afterglow of the textile samples after 2-3 seconds. 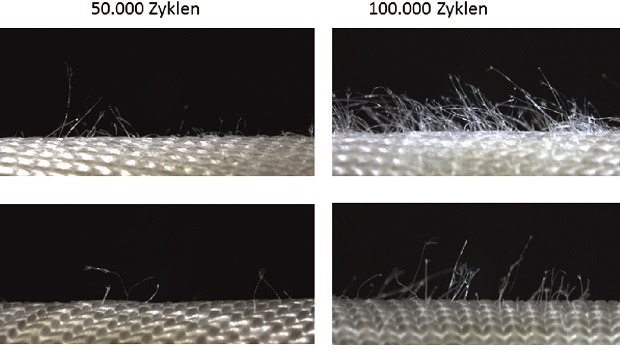 The Martindale method is one of the most frequently used methods for determining the abrasion resistance of textile fabrics (e.g. in the upholstered furniture sector). Both flame-retardant textile samples showed no damage at 50,000 and 100,000 cycles (Fig. 3). Even after 100,000 cycles, the textiles showed no great tendency to defibrillate or major surface damage.
For textile applications, resistance is an important indicator. The resistance of the paint to abrasion is defined by the rub fastness. The evaluation takes place in 5 steps (authenticity numbers), whereby step 5 means a very high rub fastness and step 1 a very low one. Both the dry and wet rub fastness of the differently dyed textiles was examined. All dye classes achieved ratings between 4 and 5. Only the textile samples dyed with sulfur dyes achieved a wet rub fastness rating of 2 or 3.
Due to the textile application and the proximity to the skin it was necessary to examine the textiles for body compatibility. Such tests on body compatibility also provide further indirect proof as to whether the flame-retardants used were actually incorporated into the polymer chain and therefore do not migrate to the surface of the textile. An Mtt test was carried out to check skin compatibility (DIN EN ISO 10993-5:2009-10). The cytotoxicity is tested at 2 different sample concentrations after wearing simulation. If the vitality of the cells drops to the test is considered as failed tested textiles reached values of 92-98 and impressively proved that flame-retardants are firmly integrated into polymer chain not released.