The Fiber Year 2020 – Deceleration along the textile chain 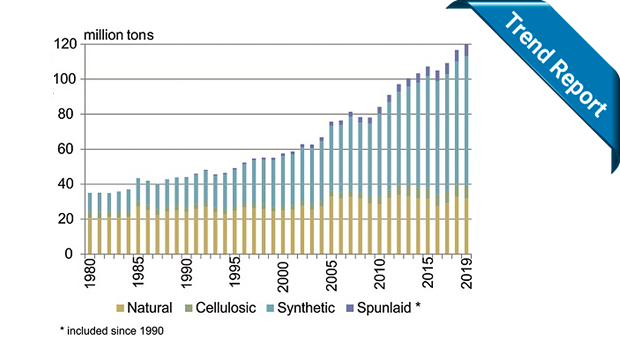 Economic outlook projections from the IMF for 2019 were repeatedly revised downwards from 3.9% global growth published in July 2018 to just 2.9% released at the World Economic Forum in Davos in January 2020. Hence, world economic growth recorded its slowest pace since the financial crisis a decade ago. Intensifying trade uncertainties and barriers, slowdown in advanced economies, weakness in some large emerging markets and geopolitical tensions weighed on business sentiment and resulted in machinery investments and household consumption to decelerate. Adverse business conditions affected the global textile industry, and the entire textile value chain suffered from significant deceleration last year before a dramatic contraction began after the corona virus outbreak.
Supply from natural fibers growing, man-made fiber and spunlaid production slowed to less than 3% growth from almost 7% expansion in the year before. Global supply was expanded by spunlaid nonwovens that meet almost one kg per capita textile demand by now. This web-forming process skips a production stage as the polymer-based technology directly delivers a finished fabric. The total market size on the supply side accounted for 120 million tons, which translates into an average consumption of almost 16 kg per capita.
Cultivation of natural fibers decreased 3% to 32 million tons with cotton output after 2-year growth falling faster to 26 million tons, wool softening nearly 1%, bast fibers projected to have grown by 1%, while other natural fibers were relatively stable.
Man-made cellulosic fibers continued their dynamic growth, expanding more than 6% to 7 million tons. Viscose staple fibers including modal and lyocell accelerated 8%, while filaments witnessed a modest decline and acetate tow experienced modest growth. Synthetics achieved 5% growth thanks to robust expansion of polyester (PET) filaments and staple fibers, whereas polyamide (PA) slightly rose and both acrylic and polypropylene (PP) fibers weakened. Small-scale fiber segments like aramid, carbon and elastane (spandex) fibers all experienced growth at decelerated pace. The total volume amounted to 74 million tons.

Spunlaid nonwovens, newly included in global supply, slowed to the lowest growth rate in the century at nearly 4% to reach almost 7 million tons.
Last year’s dynamics in the 4 market segments revealed quite different results. The performance in 2019 was characterized by output of natural fibers falling 3%, which was the 10th yearly decline in the century. It was predominantly caused by reduced cotton production in the 2018/19 season after double-digit gain in the season before. The entire man-made cellulosic fibers business continued to outperform the market after growing more than 6% and synthetics, predominantly PET, advanced 5%. Spunlaid nonwovens slowed to the lowest growth rate in the century at nearly 4%, which was less than half the average annual growth rate in the century.
A more detailed view for selected fiber segments confirmed the long-term trend with viscose staple fibers and PET pushing global volumes while PP and acrylics further slowed. Cotton did not reach the 5-year high from preceding season but latest July projections from ICAC for 2019/20 season suggest a rebound with the sharpest inventory accumulation in 7 years. The slump in cotton demand as direct response to the corona virus will badly affect future planting and cotton prices. 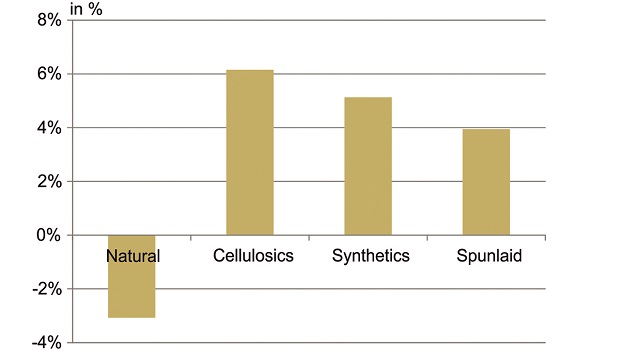 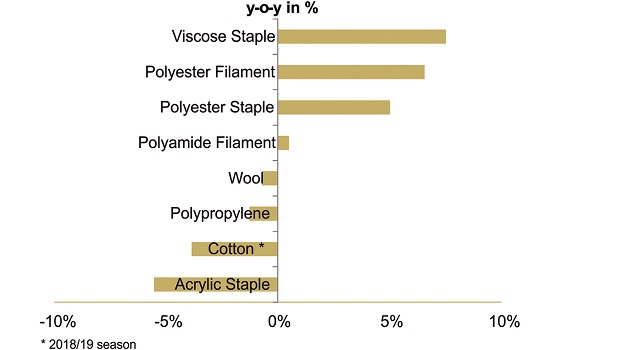 
Textile value chain 2019
The introduction of 3 key figures along the textile chain illustrates different dynamics. Global supply decelerated from almost 7% growth in 2018 with man-made fibers further enlarging their share to 68%.
The second key figure describes annual changes of the volume entering textile processing for mainly knitting, weaving, fiber-based nonwovens and unspun end-uses. It takes into account inventory changes from official sources. Global cotton data are split into production and use, whereas worldwide data for the large-scale manmade fiber business are not available, which would help to increase transparency along the value chain. Expanded plant sizes and the transition from extruder spinning to continuous polymerization PET plants, in particular, are believed to attach more relevance to this factor. The volume change of materials entering processing grew, but meant another steep slowdown from nearly 5% a year ago.
The third key figure refers to final end-use at retail stage. A global view is impossible, as full-year trade figures at that point of time are missing. The sample of 17 countries with a joint population of 3.1 billion last year includes lower, upper-middle and high income countries. 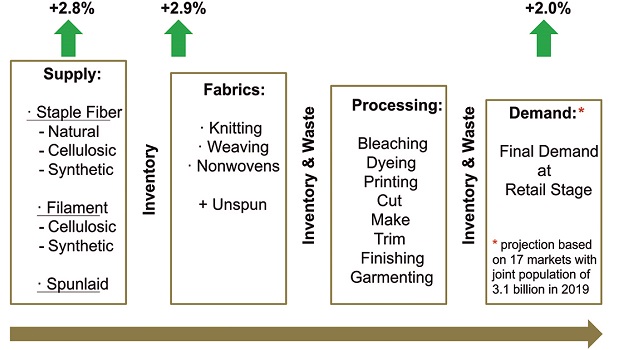 
Contracting trade figures
Textile and clothing trade for 60 countries compiled in the report including extra-EU shipments witnessed a reduction compared with 2018, exports down 1.3% and imports declining 1.7%. Most of the leading exporting nations suffered from decreases.
Chinese exports softened 1.9% to US$ 272 billion after 2-year recovery as essentially apparel shipments dropped 4.0 % to $151 billion, down $35 billion from peak in 2014. The US-China trade war has left its mark on bilateral trade as US imports fell 10.1%, equal to a shortfall of $4.1 billion. Chinese global exports in the 1st half (H1) of 2020 delivered a mixed picture with textile exports surging more than a quarter but apparel shipments contracting 22 %.
Bangladesh managed to marginally lift exports to $36 billion in 2019 but suffered from a hefty plunge of apparel shipments in April at -85% and May 2020 at -62%. Strong increases in last year’s exports have further been observed in Vietnam (+6%), Myanmar (+23%), Cambodia (+10%) and Brazil at 38%.
Brazilian exports marked an all-time high following record high cotton shipments. A bumper cotton crop confirmed the country as the world‘s second-largest export position behind the USA, marking a new all-time high and further expansion in 2019/20 season is projected in ICAC’s July release for production (+4%), exports (+45%) and ending stocks (+15%) although export growth will be increasingly challenged by the US-China Phase One trade deal signed in January 2020 and slowing cotton demand across all markets in Asia that scaled back purchases.

More on this subject
The Fiber Year 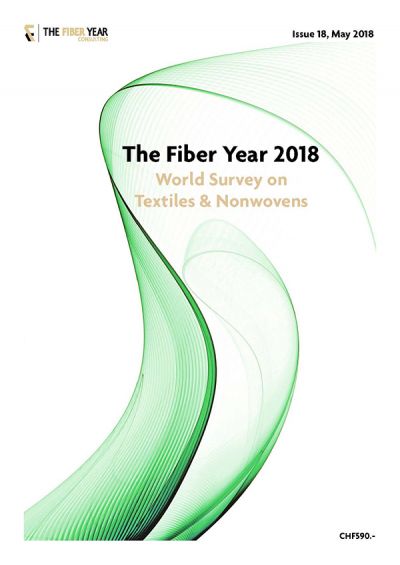