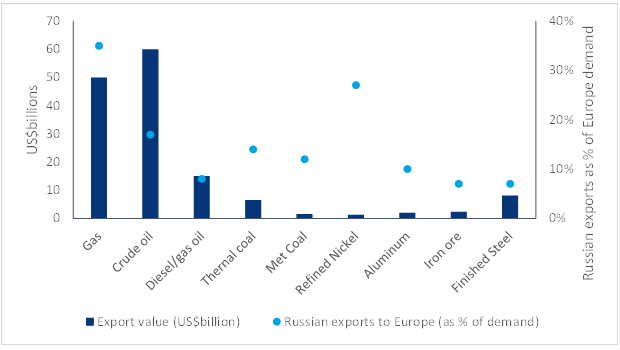 
The Ukraine war rattled global markets and may leave lasting mark on world economy. The world’s dependence on Russia for certain commodities cannot be overstated ‒ from gas, coal, oil, iron ore, aluminium, platinum group metals and zinc to copper, lead, petrochemicals and fertilizers. Many major international oil and gas companies, utilities and miners are invested in Russia.
A global team of Wood Mackenzie Ltd., Edinburgh/UK, has analyzed the risks to commodities and corporate exposure, as well as the wider economic fallout.
War in the Ukraine is piling pressure onto a European gas market that was already going through its worst crisis on record. Russian pipeline imports account for 38% of EU demand, making sanctions on Russian flows prohibitive. However, if the EU was to stop all Russian gas flows, the long-term implications could be severe.
Russia, too, would lose much. At current prices, it would give up US$7.5 billion of revenues a month, possibly more. In the tussle between Russia and the EU over gas imports, business as usual remains the most pragmatic, and likely, outcome.
The invasion, though, will push the EU to question its dependency on Russian gas. New supply will take time to materialize and will see higher prices in the medium term. Nonetheless, liquefied natural gas (LNG) players in the USA, Qatar and beyond are starting to gear up; as are pipe suppliers from Azerbaijan, the East Med and Norway.
The crisis will also push the EU to rethink the role of gas in its decarbonization strategy. Higher gas prices make a stronger case for renewables, as well as alternative gases such as bio-methane and green hydrogen.
Russia’s economy is in a better position to withstand sanctions than it was in 2014 when it annexed the Crimea. The conflict hurts the Ukraine’s economy most. If energy flows are affected, the global impact could be severe. Neither Russia nor the Western allies will want to disrupt flows, but it cannot be ruled out.
Russia has built a reserve cushion that could soften the impact of sanctions short term. Being frozen out of international bond markets means new sovereign debt needs to be financed domestically. Reserves cover the $50 billion due in principal repayments on government debt through 2025.
In the Ukraine, the conflict risks disrupting economic activity and causing damage to capital stock. Its economy is likely to be back in recession in 2022 unless the situation de-escalates quickly.