Photovoltaic installation proves its worth 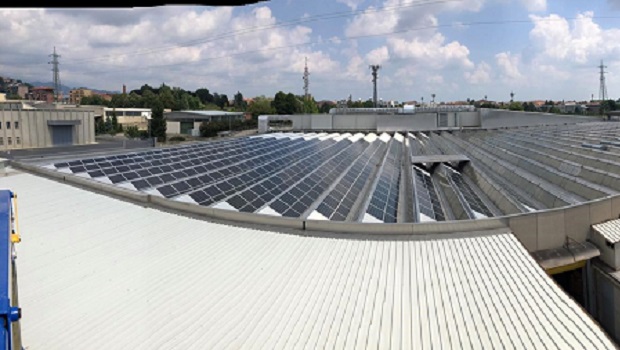 10 years after the installation of the photovoltaic plant in its production units, the Marchi & Fildi Group has taken stock of the operation and publishes the data on energy produced, consumed, and fed back into the grid.
The photovoltaic plant is made up of 11,385 modules divided between the 3 facilities in Biella/Italy (Production), Cerrione/Italy (Dyeing mill) and Verrone/Italy (Logistics), which in total cover a surface of 16,515 m².
The balance to be drawn from these 10 years is a positive one: in total almost 23 million kWh have been produced, of which well over 7 million kWh have been used in company activities, with a saving in energy costs of approx. €1 million over 10 years.
The energy kWh produced and not used by the company was fed back into the grid and corresponds to the average annual consumption of around 4,630 families.
The Marchi & Fildi Group, Biella, in addition to producing its own electric energy, over the years has also achieved an increasing number of Energy Efficiency Titles (TEE), otherwise known as white certificates.