Enzymes to reduce emissions from the textile industry 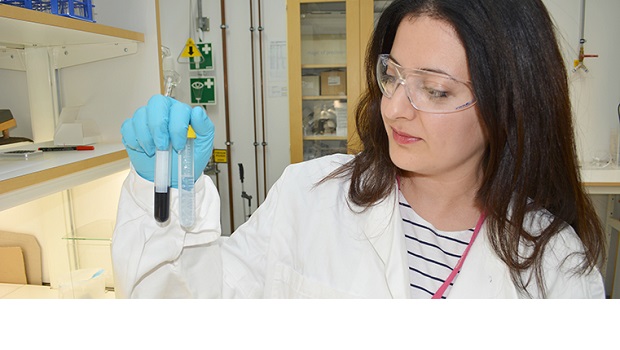 The dyeing of textiles has a major negative impact on the environment. Now, a new method for degrading the dyes and purifying the waste water has been developed at the University of Borås, Borås/Sweden.

In the dyeing process, the excess dyes and chemicals are flushed out with the waste water. In her research project, doctoral student May Kahoush has investigated 3 different methods, all of which facilitate a solution that benefits both the environment and the textile industry by reducing the consumption of water and energy, as well as the emission of hazardous chemicals. In an attempt to solve this problem, enzymes are used to initiate a degradation process of dyes and other chemicals.
Using felted carbon fiber textiles, a common material used in many different applications, the enzymes can attach and help degrade the dye molecules. The carbon fiber textile is a porous lightweight material, that resists corrosion and that is easily formed, which can be used as an alternative to expensive, rigid metals. The carbon fiber also has good electrically-conductive properties, which is a prerequisite for getting the desired properties in electro-chemical applications. One problem, however, is that the carbon fiber textile is water repellent. Thus, there has to be a pre-treatment of the material.
In one method, an eco-friendly substance from a flower, the gardenia, was used which causes the enzymes to attach directly to the surface of the carbon fiber material. In the other method, she used an environmentally-friendly coating to attach the enzymes, and in the third method a cold plasma treatment was applied.
The first 2 methods only demand small amounts of water, while the plasma method requires neither water nor chemicals and needs a low amount of energy. Due to the enzymatic activity of the enzymes on the carbon fiber material, the substance hydrogen peroxide is formed which breaks down the dyes used in textile dyeing. This contributes to reduced emissions of the dyes and other pollutants.
In addition to the purification of water, the method can be used to identify substances to which the enzyme in question reacts, in this case to glucose. It is also possible to generate electricity from biological substances used to produce sugar or alcohol.