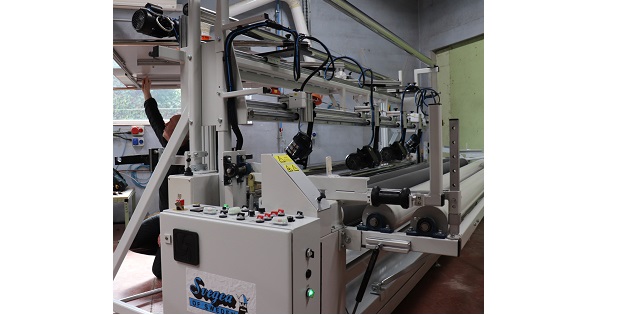 The Svegea of Sweden AB, Uddevalla/Sweden, has over 60 years of experience in designing, manufacturing and installing high quality collaret and band cutting machines, as well as other specialized systems.

The cutting machines have traditionally been employed to make components for apparel such as waistbands, cuff and neck tapes and other seam reinforcements, but increasingly, the emphasis has been on products for technical end-uses.
New special bias cutting machines are based on an ingenious system in which circular woven materials are fed to the cutter via a revolving winder and slit at angles, so that both the warp and weft of the weave are skewed at specified angles rather than just in the vertical and horizontal directions, as is usual. This allows the slit fabrics to drape and form much more easily to the complex shapes of components such as circular rubber hoses and special diaphragms and seals which are employed in the aerospace and automotive industries, and for which they act as critical reinforcements.
This much bigger and wider bias cutter is a good example of the number of specialized machines which are now being installed in Europe where a boom is being experienced. Even in the traditional area of collaret machines for apparel making up, Industry 4.0 is seeing new business arise in developed markets where for many years it has been uncompetitive.