ITMF: Deep impact of the corona pandemic on t...
ITMF

Deep impact of the corona pandemic on the global textile industry 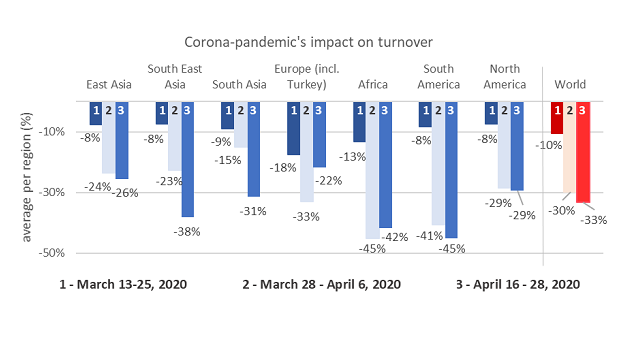 East Asia was hit first by the corona crisis, is also recovering first from it. Orders in East Asia dropped visibly less (-28%) than in all the other regions (-40% and more). Especially China and Korea were able to contain the epidemic successfully. In the last few weeks, most Chinese textile companies have ramped up production significantly. Likewise, off-line retail stores have reopened, and consumption is picking up again in East Asian countries.

Between April 16-28, 2020, the International Textile Manufacturers Federation (ITMF), Zurich/Switzerland, has conducted a 3rd survey among ITMF Members and affiliated companies and associations about the impact the Corona-pandemic on the global textile value chain, especially on current orders and expected turnover in 2020. In total 600 companies from around the world participated.
Companies in Europe are expecting turnover in 2020 to be down by 22%, a figure significantly better than the -33% reported in the 2nd survey. Companies in East Asia are expecting turnover to be down by 26%, which is close to what was reported in the 2nd survey (-24%). Companies’ turnover expectations in South East Asia and South Asia on the other hand have deteriorated significantly. These regions were hit later by the Corona-pandemic and hence the full impact was felt with a delay. Compared to 2019, expected turnover for 2020 is down by 38% in South East Asia and  by 31% in South Asia.
Turnover expectations in Africa, South America and North America have not changed much since the 2nd survey.
The most important challenges at the moment are securing enough liquidity, supply chain disruption and uncertainty. 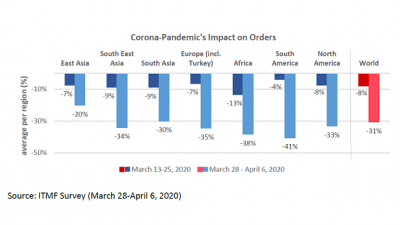 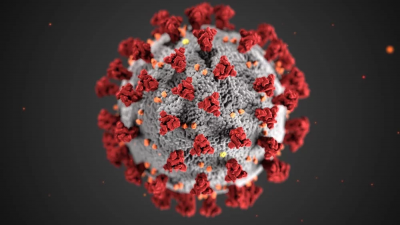 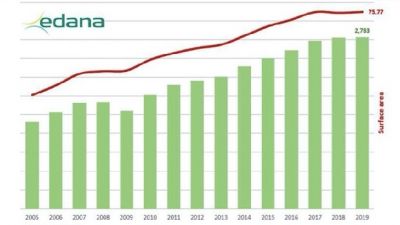 Edana
4.4% growth of European nonwovens production during the last 10 years