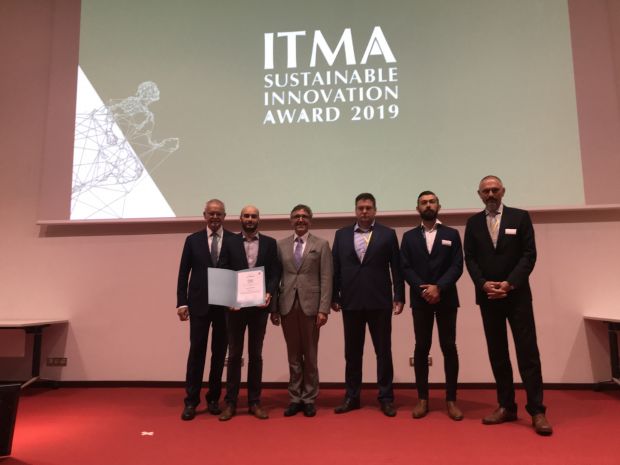 Mathias Zidda, MSc of the Institut für Textiltechnik of RWTH Aachen University (ITA), Aachen/Germany, has won the ITMA Research & Innovation Excellence Award, presented on June 20, 2019, for his 3D braiding machine which was rebuilt according to the 4.0 industry standard.


Fritz P. Mayer, President of the European Committee of Textile Machinery Manufacturers (Cematex), Zurich/Switzerland, and the German Engineering Federation (VDMA), Frankfurt/Germany, handed over the prize money of €10,000 with certificate to the winner at the world’s leading textile and garment technology exhibition ITMA 2019 in Barcelona/Spain.
The 3D braiding machine consists of an existing conventional mechanical system. It has now been digitalized and rebuilt according to industry 4.0 standard. With the help of the digital control, for example, 3D reinforced ceramic turbine components can be manufactured as prototypes and subsequently produced in series. Together with the company ark industrie AG, Aachen/Germany, and 2C-Composites GmbH & Co. KG, Heinsberg/Germany, the control system was completely redesigned so that the machine can be monitored and operated from anywhere.