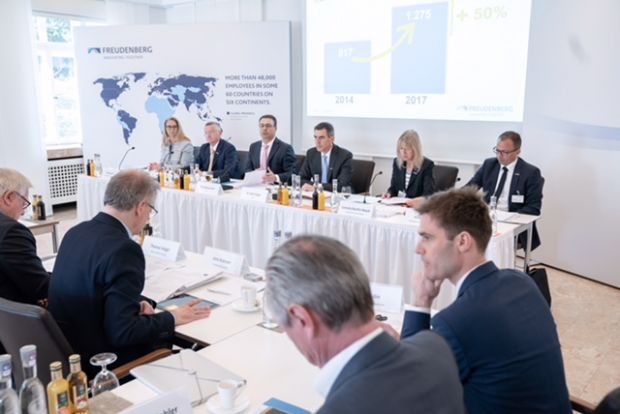 In 2017 the technology group Freudenberg SE, Weinheim/Germany, was again able to increase sales by 18.3 % to € 9.3 billion. Adjusted for the effects of acquisitions and disinvestments and exchange rate effects, sales grew by about 4 %. EBIT went up by 17.7 % to € 798 million.


In the nonwovens and filtration business segment, sales amounted to € 1.91 billion (+5.4 %). Overall, business development for Freudenberg Performance Materials in the year under review was quite positive. However, weaker than expected demand in some industries and regions impacted growth. In conjunction with unfavorable exchange rate effects this led to stagnating sales. In contrast, there was strong demand in the carpet tiles business in 2017. The Business Group also generated growth in the promising medical segment and in special applications such as microfilament textiles based on Evolon technology and in battery separators. Developments in the global automotive industry regions were mixed.

The Freudenberg Filtration Technologies defended its position as the market leader in original equipment and original spare parts in the cabin air filtration segment despite a generally challenging market environment and increased competitive and price pressure. To consolidate this position, the Business group invested in efficiency-enhancing manufacturing processes and differentiated product innovations as well as the further development of global key account management.

Global market conditions for Japan Vilene Company in 2017 were mixed. Compared with the previous year, business development improved in Japan and slackened in North America and Asia.

Conditions for the Industrial Materials division varied, particularly as a result of the difficult situation for Medical Materials business in Japan and Hygiene in Korea. Developments in the Air Filters and Battery Separators segment were generally positive.