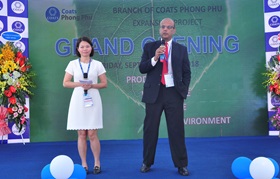 The industrial yarn and consumer textile crafts business Coats Plc., Uxbridge/UK, has unveiled the latest expansion to its global operations with the opening of a new development in Vietnam.


The extension to its site in Hung Yen, near Hanoi, was formally opened by Rajiv Sharma, Group Chief Executive, at a ceremony on September 21, 2018. The event was attended by representatives from the long standing joint venture in Vietnam with Phong Phu Corp., Ho Chi Minh City/Vietnam, as well as local government officials, customers, suppliers and members of the Coats Group Executive Team.

The additional capacity makes the Hung Yen site one of Coats’ largest manufacturing units. It will enable dyeing and finishing operations to be increased by over 40% and also provides additional warehouse space. It manufactures many of Coats’ newest and most innovative products including EcoVerde, the first range of premium threads to be made from 100% recycled post-consumer recycled core spun thread. It also produces flagship thread ranges such as Epic as well as Performance Materials yarns.

Coats first opened a site in Hanoi in 1992 and relocated to the current Hung Yen location in 2006. It also has a manufacturing facility in Ho Chi Minh City.