Textile Industry 4.0. Where do we stand? 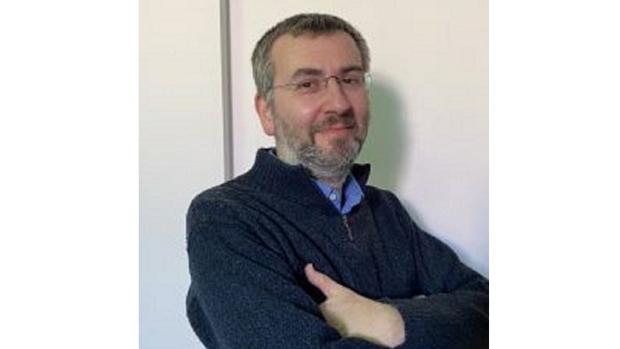 When people talk today about Industry 4.0 it is mostly done by referring to calls for tenders and funding, often without adequately clarifying the technical aspects of what is – or should be – a real ‘4th Industrial Revolution’, after the 1st (between the 1700s and 1800s, with the development of Watt’s steam engine and innovation in the textile and metal industries), the 2nd (between the 1800s and 1900s, with electricity, oil, the internal combustion engine, chemicals and mass production for mass markets) and the 3rd (in the second half of the 1900s, with information technology, computers and management software).

Industry 4.0 means many things, including artificial intelligence (AI), machine learning, big data, internet of things, cloud and Smart production. Concretely, and looking specifically at the field of textile production, what can be the scope of this revolution and what could be the most innovative features from the point of view e.g. of quality control, production planning, Predictive Maintenance and production defect detection?
If we want to summarize the concept, Industry 4.0 introduces a new buzzword, that of ‘Smart Factory’, literally ‘Intelligent Factory’.
Therefore, when we talk about Industry 4.0, before we think of declining everything into the realm of AI, we need to be aware of this fundamental assumption, namely that it is good that everything should be as ‘intelligent’ as possible, but not necessarily ‘artificial’.
It has been about 12 years since anyone started talking about the ‘4th Industrial Revolution’, and in this period we have to all intents and purposes entered the ‘era of variability’, where the acceleration of technological progress and the continuous mutability – not to say volatility – of knowledge in many disciplinary fields impose the need to think and elaborate continuously new strategies, under conditions of ever-increasing complexity and unpredictability.
In this context around us, the game is likely to be played on 2 fields:
In the Smart Factory, processes and products must not only make use of, but also incorporate, process, metabolize and improve pre-coded information, while at the same time constantly interacting with many variables in the operating environment, exchanging information with the key players involved, whether they are other producers and/or other consumers and/or other users. And this is the field in which AI plays.
In the Smart Factory, communication skills become, in fact, the most important part of the operators’ skills and professionalism: we are in the presence of overcoming the traditional conception of individual task and professional competence, because what each person does is embedded in a set of information flows that can change relentlessly: those who stop at what is ‘known’ and what is ‘certain’ risk being left behind.

Let us just think for a moment about how people still work – and produce – in many of the textile/manufacturing companies known to us, and try to ask ourselves some questions.
•    Is the work and skill set of the ‘human resource’ focused on doing basically ‘smart’ things?
•    Isn’t time (and thus value) wasted doing things that are repetitive, sometimes redundant or otherwise related to a scenario that is absolutely predictable and controllable by an algorithm?
•    Are the computer processes set up to direct, control and analyze physical processes just something random – they run for those interested in them, who make sure they run them just enough when they are needed – or are they the ones that make machinery run efficiently, effectively and economically, enabling human resources to do intelligent, i.e. inherently much more useful, things?
•    Is ‘corporate information’ – which is the company’s most important intangible asset – something unique and univocal or is it something scattered in a thousand different places, at the mercy of the initiative of individuals and the ‘interpretative goodwill’ of those who want and/or need to make use of it?
If the answers to these questions are what I think they are, then we can agree that Industry 4.0 can make sense, indeed it makes sense and is not just a slogan.

Any transition phase is also historically accompanied by communicative and rhetorical aspects that emphasize elements that are instead destined to only minimally affect specific change in the industry. In textile 4.0, which aspects are, in your opinion, over-emphasized and over-emphasized in terms of their possible impact?
I would say that in order to adequately answer this question, we first need to clear the field of a potential misunderstanding: when thinking about the Smart Service component of Industry 4.0, it can be misleading to reason generically in terms of IT inculcation as a natural continuation of IT literacy.
We come from decades of computer literacy; by now, in almost all the textile/manufacturing companies that we have known over the years and helped to grow and improve, the various information systems that make up what is known as the ‘company information management system’ already in many cases exchange data without anyone doing – or thinking – anything; already a large part of the operators working on the machinery no longer use paper and pen to note down what they have done or to record the data collected and communicate them to those who have to use or analyze them; the normal relationship between the company and its customers is on real portals.
Consequently, in the current context, the widespread tendency that has historically taken hold is that in the context of Industry 4.0 investments, the company should simply take a small step forward and computerize a little more.
Unfortunately, this process of inculturation was – and still is – seen almost as a necessary evil.
Industry 4.0 is not a slogan; it means believing that – by investing seriously – we can seriously improve.

Do you see potential dangers – from a human and ethical point of view – in an exaggerated and radical 4.0 approach? How can the AI revolution be handled wisely, forward-looking and balanced?
It is very recent news that Google Artificial Intelligence researcher Blake Lemoine has been placed on administrative leave (= fired) after publicly stating that “…LaMda, a language model designed to converse with people, it was sentient…”.
At one point, according to reports in the Washington Post, Lemoine even went so far as to request that LaMda be represented by a lawyer, adding that his belief in the ‘personality’ of the language model was based on the fact that LaMda had told him that he had a soul.
The possibility of more intelligent AI applications gaining awareness is a topic that has been addressed often, especially in the face of attempts by companies such as Google, Microsoft, IBM and Nvidia to ‘train’ large-scale language models in recent years.
Personally, I think that the problem we face today is on a distinctly different plane, and that – as usual – we go out of our way to distract public opinion and take it to another ideal side.

The concept of Industry 4.0 has no direct connection with the concept of AI.
There is only mixing between the 2. AI today is – and can be – exclusively functional for Industry 4.0. Not vice versa.
Or rather, Industry 4.0 cannot and should never be subservient to AI.
In the evolution of things, however, I see only one great risk, and that is the one, which unfortunately has already occurred for example in the banking and financial sector – that AI will be perceived by insiders as something capable of replacing the person at the heart of everyday decision-making.
This possibility in the textile/manufacturing world must absolutely not occur.
The textile/manufacturing world has overcome so many crises in the last 25 years, because there is no artificial intelligence that holds: there is the ‘natural’ intelligence of people, of human resources. AI comes later, and helps to do things better.
Industry 4.0 can and should be a great help, it can and should allow one to make ‘the big leap’, but it can never replace the person.

Today, Datatex is an international leader in ERP solutions for the textile industry. How can Datatex help textile companies with regard to Transition 4.0?
Our philosophy of life – our company name – does not change, and what we propose to our partners is constantly evolving in concrete terms according to the evolution of technologies, but conceptually it has not changed over time, it will never change, and can be summarized as follows: fewer steps, fewer people directly involved, less chance of error, more alternatives allowed, more exceptions managed, more flexibility in the interpretation of a situation, of a condition, wider margins of action in decision-making processes, narrower margins in repetitive processes, less time lost in triggering and controlling something attributable to an algorithm, more time spent thinking about and verifying what an algorithm can never judge on its merits.

Examples of customers
Here are some examples – taken at random by our customers – ranging from relatively minimal, but controlled and error-proof situations (collection of machine control data with handheld terminals, by means of bar code readings) to rather ‘pushy’ situations (functions on the ERP system that directly control the PLCs of the machines, flanking or fully replacing the action of the operator).

I am reminded of a scenario at EOS Textile Ltd. (Savar/Bangladesh), where the fully automated interaction between our NOW System and Automha SpA’s automated warehouse not only optimizes the loading and unloading flows of all materials and finished products, but also eliminates any errors due to miscommunication or misinterpretation of what and how much should be ‘loaded into’ or ‘taken out of’ the warehouse.

Also, in the EOS, thanks to the constant and total interaction between NOW and the Antara loom control system by Incas S.p.A, warping and weaving production is programmed on all machines and kept constantly under control, thus making it possible to plan well in advance the subsequent processing phases, as well as to have the evolution of each single piece of fabric produced in real time under one’s eyes.

Or Flash SRB doo (Apatin/Serbia), a company in which all the systems for managing the fabric dyeing department are interconnected to NOW, namely the management of the dyeing laboratory of Intex System Srl, the volumetric dosing machine of Salce Srl, the control of the dyeing machines of Orgatex Setex GmbH, the “color kitchen” of Datacolor; here, all systems speak the same language: a single article code, a single color code, a single combination of recipe and color, a single production order valid for communicating to all systems what is to be sampled or produced, and collecting from the systems what has been produced, in what quantity, at what time and consuming what dyes and auxiliary materials.

Or Stamperia di Martinengo Srl (Martinengo/Italy) where everything that is carried out in some of the printing, steaming, washing and finishing machines is fed back into NOW in real time, and where NOW – by maintaining an inferential engine of data received from the machines – is in turn able to suggest to the machines what is the appropriate steaming and/or washing recipe for each item to be processed, or what is the correct cylinder setup of the printing machine for a given design. In this case, a bit of AI, which doesn’t hurt.

However, it would be a mistake to make the assumption that Industry 4.0 is merely a matter of enabling technologies: what is most important in studying and fine-tuning what is the ‘Enterprise Information Management System’ is that everything must contribute to producing – and selling – more and better, wasting less. 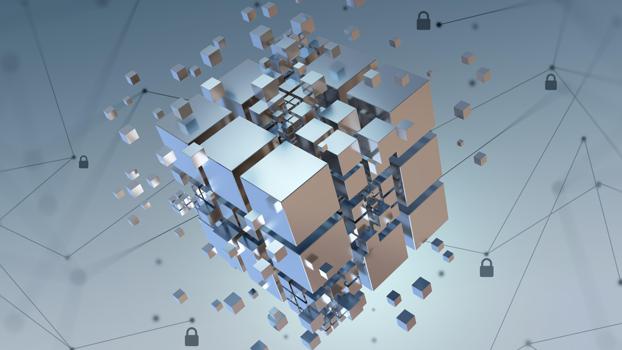 The materials used to reproduce fake products often turn out to be harmful to health and the environment. » 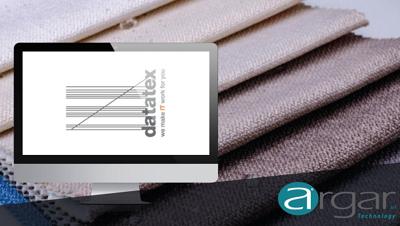 Datatex
IT solution for Argar srl 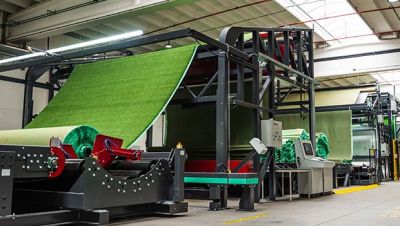 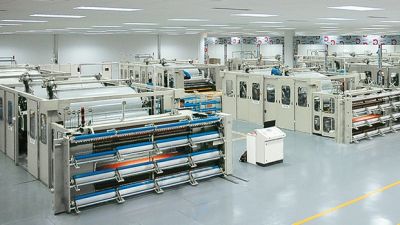