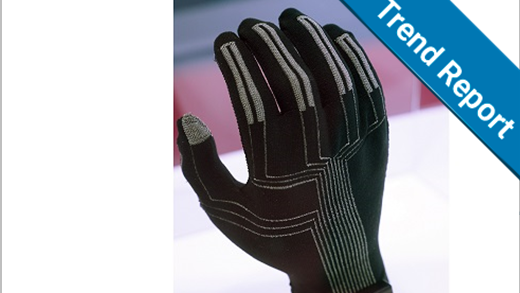 Assistance systems for the digital data acquisition of human motion sequences and patterns such as data gloves can be beneficial of use in various areas of application. Examples include the industrial field to assist during complex working processes, the field of virtual reality (VR) or augmented reality (AR) to intuitively operate in virtual environments but also the area of gaming, where a direct input option helps to experience the environment more intensely.


However, many data gloves available on the market are especially designed for movement analyses for professional virtual reality and animation applications. Therefore, their equipment and functions match the requirements in this area which is reflected in the type and number of sensors used. Usually, the manufacturing process of those gloves involves the insertion of conventional sensors between the textile layers and their subsequent fixing in the defined position. This process, which is only suitable for the production of small quantities, results in multi-step procedures, is highly time consuming and therefore cost intensive. The use of textile sensors instead of conventional sensors in addition to the use of textile conducting paths enables a full integration of all necessary components and functions into the glove. This simplifies the manufacturing process significantly and allows for a cost-effective and automatable serial production. Furthermore, due to their textile characteristics, the use of textile-based components results in an increased wearing comfort for the user, a very good fit of the glove and the prevention of restrictions in free movement caused by rigid elements. 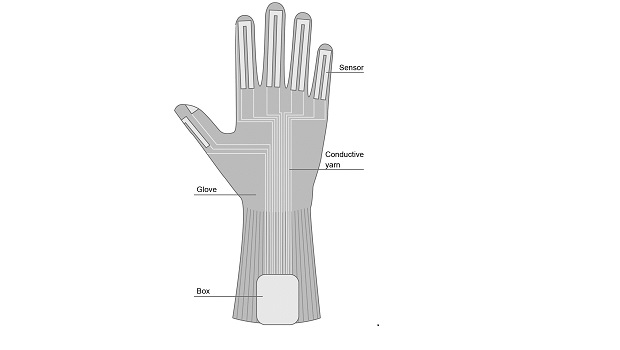 
Concept The concept on which the Knitted Sensor Glove is based comprises a complete system for the data acquisition and evaluation regarding the bending angle of the fingers. This system consists of 2 modules, the glove itself and a box containing the necessary electronics and ideally a power source, which is connected to the glove via an interface. While the sensor system for the data acquisition is integrated into the glove, the data processing and analysis take place in the box (Fig. 1). This modular design allows for the replacement of single modules in case of increased wear and tear with the advantage that cost intensive components (e.g. electronics for data processing and analysis, power supply) can be re-used. The protection of the enclosed components is ensured by the position at the wrist, which is minimally exposed to impacts and friction, as well as the possibility to design the box with appropriate materials to make it waterproof and impact-resistant while maintaining the best possible wearing comfort of the glove. The use of flat knitting technology is predestined for the technical realization of the glove. This technology allows for the manufacturing of the sensor functionality as well as for the carrier substrate in the form of the glove itself at the same time (Fig. 2). 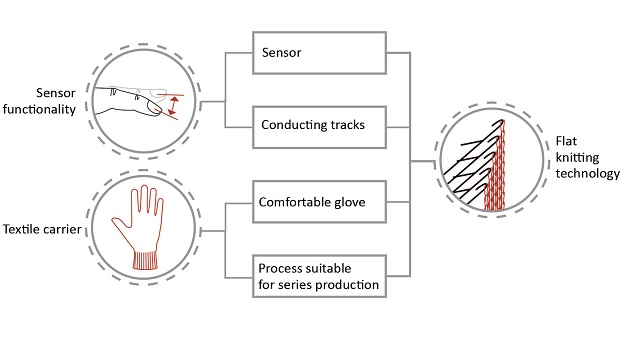 The sensor functionality refers to the sensor itself which detects the finger bending but also to the necessary conducting tracks which transfer the sensor information to the data processing unit. Due to the use of conductive yarn in the knitting structure it is possible to create a knitted stretch sensor to measure the finger bending (flexion). These sensors work according to the resistive principle, which means that the measured electrical resistance which shifts due to the amount of contact points between the knitted loops is directly related to the finger bending of the regarding finger. The sensors are positioned at the back of the fingers to gain optimal data. Furthermore, in this position the impact of interferences caused through grasping movements and contact with gripped objects is considerably lower than compared to the position in the inner side of the fingers. Furthermore, the risk of damage through use is considerably lower. The conducting paths are also realized by the use of conductive yarn. Therefore it is possible to form the sensor and the respective conductive path with one continuously integrated conductive yarn. Because of this, the critical junction between sensor and path is eliminated and therefore no additional electrical contact is needed. The textile substrate, i.e. the glove itself, is knitted as a seamless fully-fashioned item by knit and wear technology. With this technology, the sensors as well as the conducting paths can be directly integrated in one single production step. Thus a subsequent tailoring is eliminated. This results in a saving in the amount of needed process steps and leads to an increase of accuracy in the sensor positioning as well as an increase of wearing comfort because of the omission of undesired joining seams. Furthermore, the production process represents a technically feasible and industrially scalable process.

Realization For the realization of the Knitted Sensor Glove a large number of functional sections for the sensors and conducting paths are necessary, which have to be integrated in a very confined space. Additionally, various sections of the glove are plated in different yarn combinations. This increases the number of needed changes of the operating yarn guides as well as their repositioning during the knitting process tremendously. The ADF process technology by the H. Stoll AG & Co. KG, Reutlingen/Germany, allows for an autarkic control of the yarn guides by which the movement and repositioning of the guides is made possible even without a simultaneous knitting process having to be executed. This ensures a safe thread inlay into the needle as well as a reliable plating technology within narrowly defined functional sections even when numerous changes of the guides are needed. An additional benefit of the autarkic control is the flexible knitting of the front and the back knitting layer. Accordingly, undesired yarn crossings are systematically prevented which serves the knit and wear assembly of the glove. For the realization, the flat bed knitting machine ADF 530 – 32 ki W multi-gauge with the gauge E7.2 was used. The machine was equipped with accessory components for an optimized thread tension of the yarn infeed (storage feeders, yarn-tension-controlled feeder, spool rack with adjustable yarn guiding elements) as well as adapted camlock parts in accordance with the knitting task. Furthermore, the quality of the loop forming process was ensured by shape-optimized sinkers in the needle bed. The use of electrically conductive yarn is crucial for the sensory as well as for the electric functionality of the sensors and conducting paths. In the Knitted Sensor Glove, the conductive yarn Silver-tech 120 from Amann & Söhne GmbH & Co. KG, Bönnigheim/Germany, was used. Furthermore, a polyamide multifilament yarn (PA 66 78f34x2) was used as base material because of its high wear resistance. To improve the correct fit of the glove and to stabilize the exact positioning of the sensors, preventing them from shifting, an elastic thread (covered yarn with an elastic core of elastane) was also incorporated. The intarsia technique allows for the integration of the sensors as well as conducting paths with a precise fit. The elastic thread feeds all loops in the tubular knitting weave of the glove and is therefore the supporting thread (plating thread). The conductive yarns for the sensors and the conducting paths are placed in the predefined needles for the loop forming process together with the plating thread. Because of the plating in the functional sections, the plating thread is in charge of the electrical isolation to the human body. For all other sections (glove base structure) as well as for the finger-tip-beginning and wristband the polyamide-multifilament yarn is used and plated together with the aforementioned elastic thread in these sections. The sensors have been realized by U-shaped intarsia insertions. Because of the fabric-forming process of knitting, there is a technically predetermined direction. This means that knitting machines are not able to knit “backwards”. This rules out the possibility of manufacturing the U-shaped sensor with just one single yarn in continuous routing. For this reason, it was necessary to build a reliable electrical contact between the 2 sensor legs in the bridge area, which was realized by alternating courses of the 2 used conductive yarns (Fig. 3). For the knitting process, a knitting-in as well as a knitting-out of the used yarns is technically necessary. It became apparent that in particular where the knitting-out takes place, in the area of the glove cuff, unintended electrical bypasses are caused by protruding yarn ends. This undesired bypasses have been suppressed by the additional use of hotmelt bonding yarn (Grilon, Ems-Chemie Holding, AG, Domat/Switzerland), which has been integrated in the mentioned area by knitting, and a subsequent fusing process to fix the position of the yarn ends. 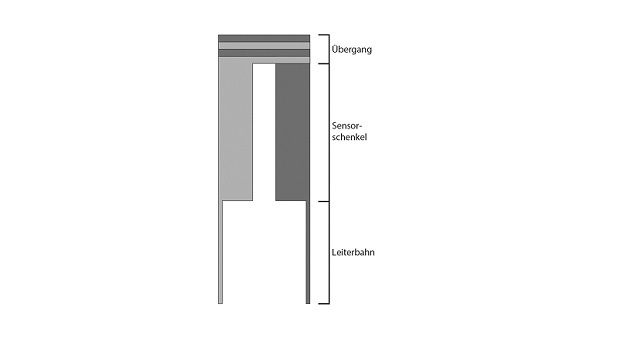 Bosch
Fig. 3: Use of 2 conductive yarns for the 2 legs (light grey/dark grey) of the U-shaped sensors

Results The results have shown that by utilization of flat knitting technology it is possible to realize the sensor functionality as well as an efficient production process. Furthermore, the ADF technology allows for the defect-free manufacturing of the necessarily small knitting sections of the Knitted Sensor Glove despite the inevitably close arrangement of the yarn guides. It was possible to realize all of the following requirements by means of flat knitting: • fully-fashioned glove (Knit and Wear) • 5 U-shaped sensors with 2 “legs” each • 10 conducting paths for contacting to the sensors. The integration of the sensors as well as of the conducting paths took place directly during the glove knitting process. Because of this, multiple productions steps as well as manual processes – which would be the case when producing the components (sensor system, glove) separately with subsequent joining – are eliminated.

More on this subject
Northrop Grumman 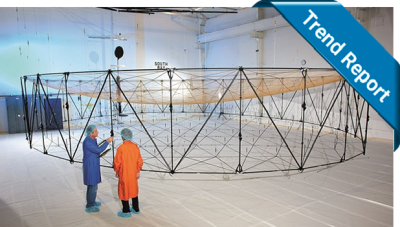