Start of mass-production of 'graphene fiber' 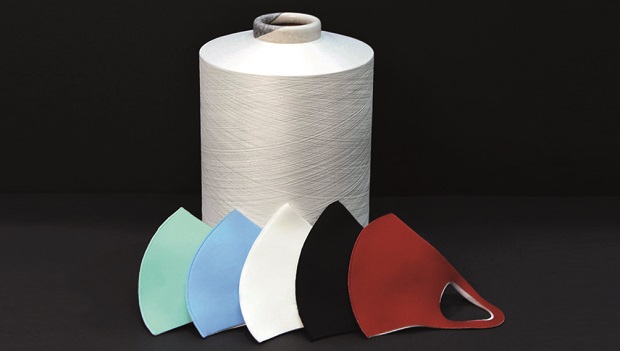 Masks made of graphene (Source: Huvis)

The leading Korean fiber producer Huvis, Seoul, has begun to mass-produce 'graphene fiber’ made from graphite, which is ­often referred to as a dream material, in earnest. Graphene is a 2D material obtained by separating one layer of carbon atoms from charcoal called graphite. Theoretically, it is over 200 times stronger than steel and boasts of outstanding thermal and electric conductivity. Due to the characteristics of the charcoal, it also has an excellent antibacterial function. As such, it is often referred to as a dream material, and it was in 2004 when a British research team succeeded in separating graphene.

Graphene fiber is produced as a yarn by injecting graphene into the fiber production process.

Until now, high-purity graphene fiber has been possible only in the research phase. As graphene, an allotrope of carbon, has such poor dispersibility, synthesis with PET (polyester) polymer is not easy. As a result, most of the graphene fiber, which has been commercialized so far, has either substandard graphene content, or the fiber is coated with a graphene material, so it can hardly be called a true graphene fiber. It is for this reason that the graphene fiber available in the market is black or gray in some cases.

Graphene is pulled off graphite in different ways depending on its use. Seoul National University Smart Nano Venture, Seoul/Korea, succeeded in separating graphene as superparticles. The Smart Nano research team, led by doctors who had graduated from the department of chemistry, succeeded in developing a single-layer, high-purity graphene in 2018, and further developed liquid graphene, not powder-type, in 2019.

Afterwards, NeoEnpla Co., Ltd., Hwaseong/Korea, an environment-friendly plastics developer, received the graphene from Smart Nano, and from there developed the graphene masterbatch for fiber production. NeoEnpla used its proprietary technology for combining a heterogeneous material, called MEPPS (Mechanical Engineering & Polymer Processing System) that it had developed independently, to succeed with a stable combination of graphene with PET polymer.

Huvis and NeoEnpla have been producing graphene fiber on a ­pilot basis since March 2020. After having conducted 7 tests to increase the purity of the graphene, they finally succeeded in ­developing high-purity graphene fiber. Single-layer graphene, obtained by separating a layer from graphite, is expensive. It is impossible to mass-produce fiber with one layer alone, and as such, Huvis makes mass-producible graphene fiber by adding

In March 2021, Huvis and NeoEnpla signed an MOU for the stable, mass-production of graphene fiber and for the deployment of various differentiated products. This MOU will enable Huvis to receive exclusive supplies of graphene master batches for fiber over the next 5 years. The two companies are also planning to continuously conduct joint promotion both at home and abroad in addition to further R&D to expand graphene yarns.

As graphene fiber will have an antibacterial, antifungal, and anti­viral function, and the far infrared ray emission and antistatic function are semi-permanent without any special processing, it has an infinite range of applicability. In the antibacterial test, the death rate of Staphylococcus aureus and pneumococcus was 99.9 % before and after washing demonstrating how graphene fiber is highly antibacterial. In the anti-viral test, Influenza A virus was reduced by 99.85 %, and the material’s UV blocking rate and far infrared emissivity were also excellent above the standard.

Graphene fiber is, however, still in the early stage of development. The 2 companies are using the characteristics of the graphene fiber they have developed to produce functional clothes, medical goods, bedding, and masks on a trial basis, and are aiming to develop conductive fibers, which can be used as special work clothes in the semiconductor process, by increasing the graphene content.

Graphene yarn and masks made of graphene

As the graphene fiber developed by Huvis uses high-purity graphene, it is produced in a white color, and as it has good dyeability, it can be dyed in various colors