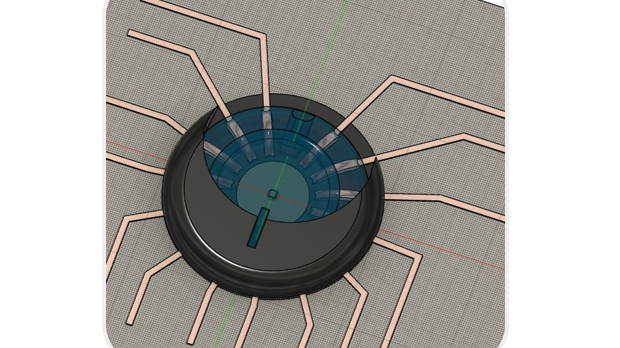 It has previously been shown that materials tailored to 3D printing on textiles can be used to personalize garments with perfectly fitting body-contoured elements. The new project Smart3D goes one step further and aims to functionalize the personalized areas further by incorporating smart functionalities. Conductive thermoplastic printing materials currently under development promise the elegant encapsulation and integration of non-textile elements such as batteries and PCBs on athletic and protective wear. The newly developed materials will be used to print conductive paths, offering an alternative manufacturing technique that is not reliant on conductive fibers or paste/ink materials. Due to multi-material printing, using conductive and isolating materials in one print process is possible, enabling easy development of different detachable or permanent connections between electronic components and a variety of textiles. Another part of this project deals with low-priced and facile manufacturing of low-pressure injection materials and molds. While this route results in permanently fixed, non-detachable elements, it offers enhanced protection to components that have a long life expectancy.

With the introduction of new materials and production technologies, Smart3D enables the development and production of one-off and small-run collections while keeping costs low. This will be especially beneficial to SMEs looking for low-risk market entry strategies in the smart textile sector.

The IGF/cornet project 276 EN “Smart3D” of the research association Forschungskuratorium Textil e. V., Berlin/Germany, is funded by the AiF within the framework of the promotion of Industrielle Gemeinschaftsforschung (IGF) by the Federal Ministry for Economic Affairs and Energy (BMWi) based on a resolution of the German parliament.

The KneTex research project at the HS Niederrhein, Mönchengladbach/Germany, is concerned with the development of a textile-integrated sensor system for feedback-supported rehabilitation after surgery on the anterior cruciate ligament. The tear of the anterior cruciate ligament leads to anatomical changes of the knee structures, which is expressed as a biomechanical disturbance of the knee. This is perceived as a feeling of instability, which is also referred to as “giving-way” phenomenon. The aim of this research project is the development of a knee bandage with integrated sensor technology for the identification of harmful movements and feedback function for the purpose of immediate correction of incorrect movement that can lead to "giving-way".

The bandage system consists of sensors, actuators and a server to process the data. The bandage's textile-integrated sensors detect the position of the knee, and the knee angle in the context of movement. 3 different knee angles (flexion/extension, internal/external rotation, varus/valgus) and the position of the knee are determined by Initial Measurement Units. The knee angle is measured using piezoresistive, textile and elastic bending sensors. In addition, an actuator system is integrated into the KneTex bandage, which provides direct feedback in the event of unfavorable movement patterns by means of targeted, initiated stimuli. The sensors and actuators are connected with flexible cable system which is embroidered by Tailored Fiber Placement process. The data from the combined system is transmitted in encrypted form via the mobile phone network to a server, where it is stored for the physiotherapist or doctor. The data is processed using a standard IT system. 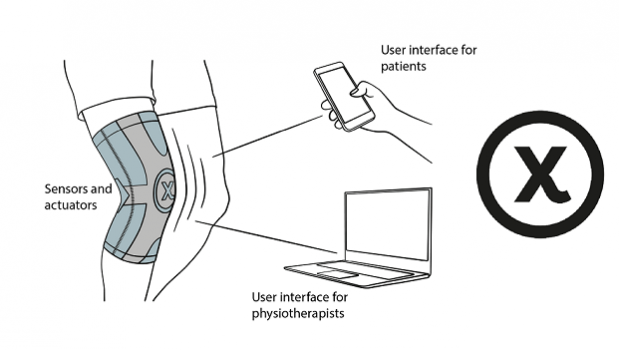 The project is funded by the European Regional Development Fund (EFRE-0801285) and realized in cooperation with project partners from the companies Bache Innovative and IXP as well as partners within the university.

The research and development project by HS Niederrhein, Mönchengladbach/Germany, deals with the patent “process and weft knitting machine to produce innovative knitwear". It describes a new type of thread supply which increases the productivity and variety of samples on weft knitting machines.