Hohenstein : Sensor T-Shirt arrived at the IS...
Hohenstein

Sensor T-Shirt arrived at the ISS 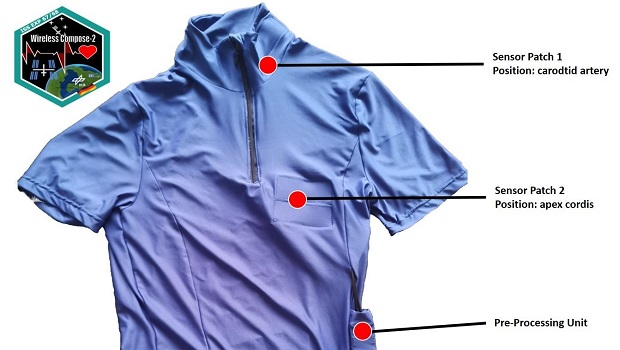 
On November 11, 2021 the German ESA astronaut Dr. Matthias Maurer left for the “Cosmic Kiss” mission on the International Space Station (ISS) for 6 months. He has the new SmartTex shirt in his luggage. This shirt can use integrated sensors to transfer physiological data from astronauts to Earth via a wireless communication network. In this way, the effects of the space environment on the human cardiovascular system, especially with regard to long-term manned space missions, will be evaluated and documented.
Developed by the German Aerospace Center (DLR) in cooperation with DSI Aerospace Technology, the Medical Faculty of Bielefeld University and textile research partner Hohenstein Institute, Bönnigheim/Germany, SmartTex will be tested for the first time as part of the Wireless Compose-2 (WICO2) project by the astronaut Dr. Maurer.
During the BEAT experiment (Ballistocardiography for Extraterrestrial Applications and long-Term missions), Matthias Maurer wears a T-shirt equipped with sensors that measure his ballistocardiographic data such as pulse and relative blood pressure. For this purpose, the sensors were calibrated in the :envihab research facility at the DLR Institute of Aerospace Medicine, Cologne/Germany. Details on the contraction rate and opening and closing times of the heart valves, which are normally only accessible via sonography or computer tomography, can also be read from the data material. The goal is to study the effects of the space environment on the human cardiovascular system. To be able to analyse these effects realistically, Maurer's ballistocardiographic data will be recorded before, during and after his stay on the ISS.
For the future, a technology transfer of the SmartTex shirt for application in the field of fitness or even in telemedicine is conceivable.