Joint forces in recycling for facemasks 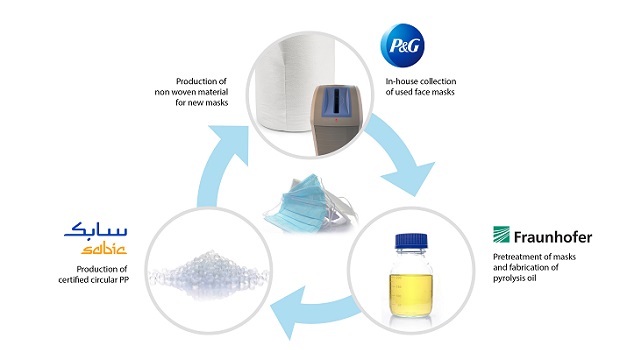 
In an innovative circular economy pilot project, the feasibility of closed-loop recycling of single-use facemasks will be demonstrated in a collaboration between the Fraunhofer Institute UMSICHT, SABIC, and Procter & Gamble (P&G). Due to Covid-19, the use of billions of disposable facemasks is raising environmental concerns especially when they are thoughtlessly discarded in public spaces.
As part of the project, Procter & Gamble Germany GmbH, Schwalbach/Germany, collected used facemasks worn by employees or given to visitors at its manufacturing and research sites in Germany. The collected used masks were sent to the Fraunhofer Institute UMSICHT, Oberhausen/Germany, for further processing in a dedicated research pyrolysis plant. Mechanical recycling is not possible in this case. In this project the masks were first automatically shredded and then thermochemically converted to pyrolysis oil. Pyrolysis breaks the plastic down into molecular fragments under pressure and heat, which will also destroy any residual pollutants or pathogens.

The pyrolysis oil was then sent to SABIC, Sittard/Netherlands, to be used as feedstock for the production of new PP resin. The resins were produced using the widely recognized principle of mass balance to combine the alternative feedstock with fossil-based feedstock in the production process. Mass balance is considered a crucial bridge between today’s large-scale linear economy and the more sustainable circular economy of the future.

Finally, to close the loop, the PP polymer was supplied to P&G, where it was processed into nonwoven fibers material again.

The entire closed loop pilot project from facemask collection to production was developed and implemented within only 7 months. The transferability of advanced recycling to other feedstocks and chemical products is being further researched at Fraunhofer CCPE, Oberhausen.
Topics
P&G SABIC Fraunhofer Institute COVID-19 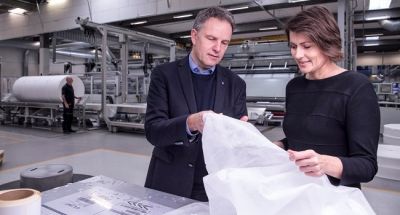