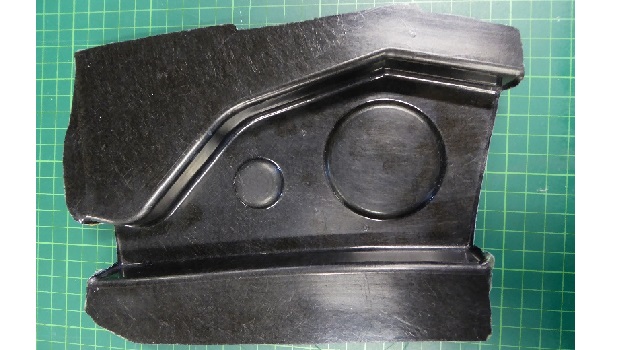 Fiber-reinforced plastics for the transport sector not only have to meet the necessary fire protection regulations but should also be produced on the basis of sustainable materials in line with increasing environmental awareness. The research partners Sächsisches Textilforschungsinstitut e.V. (STFI), Chemnitz/Germany, Leibniz-Institut für Verbundwerkstoffe GmbH (IVW), Kaiserslautern/Germany, and Centexbel, Gent/Belgium, have developed flame retardant sustainable composites for transport and building applications within the framework of the Cornet project "SusComTrab" (226 EBG). In addition to the development of sustainable textile reinforcement structures the modification of bio-based epoxy resins and benzoxazines with flame retardant additives as well as the optimization of the fiber-matrix adhesion was addressed.

The STFI developed nonwovens based on basalt fibers and recycled carbon fibers using the airlay and carding process. The web bonding was achieved by a subsequent needling process. In order to produce an environmentally friendly product and to increase the longitudinal strength of the basalt fiber nonwovens they were additionally treated with a stitch-bonding process (type Maliwatt) using a 100% basalt sewing thread made by Alterfil Nähfaden GmbH, Oederan/Germany. In addition to pre-treating the textile structures with adhesion promoters and flame-retardant finishing, Centexbel also investigated the functionalization of a bio-based epoxy and a benzoxazine resin system to achieve flame-retardant properties. For the resin modification ammonium polyphosphate (APP) and aluminium trihydrate (ATH) were used among other substances. The project partner IVW was responsible for the characterization and impregnation of the semi-finished products. The main focus here was on measuring the permeability and compressibility, as well as the mechanical testing of the resulting composites. Sample manufacturing was performed by resin transfer molding (RTM), prepregs and vacuum infusion.

The flame-retardant properties of the developed composite structures were tested according to the UL94-V flame test. Promising samples were also tested according to the flame test ISO 11925-2 for building applications as well as cone and smoke tests according to DIN EN 45545-2 which are required for railway applications. An LCA study was performed to investigate the sustainability of the developed composites compared to composites based on glass fiber and epoxy resin as benchmark. The results showed that this was the case when same amounts of fibers and resins were used.

The members of the project user committee not only provided reference materials in form of textiles and resins but also CF towpregs with benzoxazine powder which were produced by M&A Dieterle GmbH, Ottenbach/Germany. A demonstrator part was prepared based on the best resin and fiber combinations to represent an automotive application scenario (Fig.). This was kindly supported by the industrial partners Alpha Sigma GmbH, Zwickau/Germany, and EKF Karsten Müller UG, Chemnitz.

The IGF research project 226 EBG of the research associations Forschungskuratorium Textil e.V. and Flanders Innovation & Entrepreneurship was supported through the AiF for promoting the Industrial Collective Research (IGF) of the German Ministry of Economic Affairs and Energy (BMWi), based on a resolution of the German Parliament.