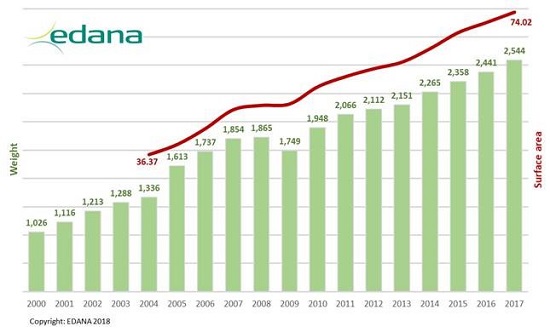 In 2017, nonwovens production in Greater Europe increased in volume by 4.3 % to reach 2.5 million tons with total estimated sales of around € 7.9 million (+5.6 %). Total European Union output is now close to 2 million tons. The international association serving the nonwovens and related industries, Edana, Brussels/Belgium, has released the results of the annual nonwovens industry survey.


Although some established players like France and the Benelux countries were at a standstill, many pushed on from last year with Greece, Romania, Czech Republic, Slovenia, the UK and Ireland all witnessing growth. In Greater Europe as a whole, the standout performers were Turkey, posting a double-digit growth rate, and Russia, where growth exceeded 9 %.

Although the primary main end-use for nonwovens continues to be the hygiene market, with a 29.8 % market share by weight, significant growth areas for nonwovens were recorded in other sectors; medical (+13.2 %), automotive (+13 %) and electronic materials (+21 %).