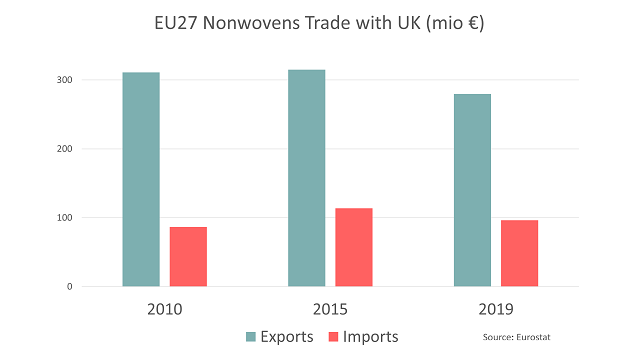 The Trade & Cooperation Agreement (TCA) signed in December 2020 between the European Union (EU) and the United Kingdom of Great Britain & Northern Ireland (UK) and, in particular, its specific rules of origin for nonwovens has been welcomed by the international association serving the nonwovens and related industries, Edana, Brussels/Belgium.

The most recent available figures cover 2019, when the UK exported nonwoven roll goods worth €96 million to the EU, while export traffic in the other direction reached a value of €280 million. The UK remains the 2nd biggest trade partner for EU local manufacturers after the USA.
This trade agreement not only guarantees that nonwovens roll goods will be able to continue to travel between EU member states and UK without customs duties, but also recognizes that a nonwovens process is sufficient to confer the origin on the product.
In order to qualify for the zero preferential tariff under the EU-UK Trade and Cooperation Agreement, products classified in HS 5603 must originate in the EU or the UK. According to the specific rule for nonwovens, devised and promoted by Edana, and included in the TCA, any nonwovens produced locally will be considered as originating in the EU or UK, even if it has been produced using non-originating materials.
The agreement provides the framework to keep doing ‘business as usual’, or even expand trade opportunities, whether they trade from the EU or the UK. Furthermore, it gives the official recognition of the fact that manufacturing nonwovens roll goods is a substantial enough operation to confer origin status of the country where the resulting goods are obtained.